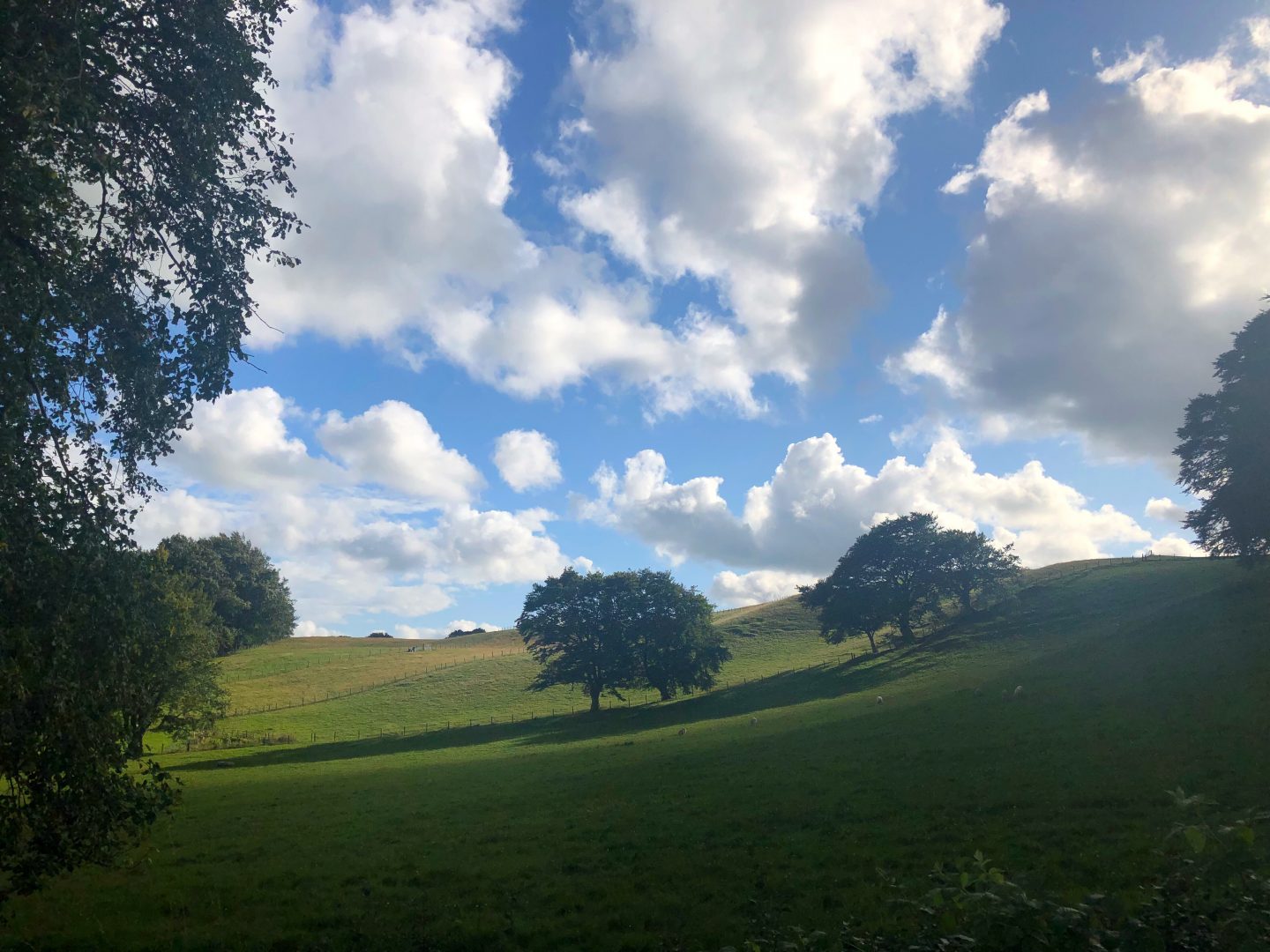 Hello! I hope today’s post finds you well? It’s late August here and change is in the air. The majority of my summer crops have been harvested and the winter crops have settled into their homes. My flower garden didn’t get the ‘its summer’ memo, and hasn’t really performed that well. I think its down to the soil, so will be adding lots of mulch and soil improvers over autumn and next spring to see if it helps for next years growing. Andrew and I have decided on our autumn / winter garden projects and can’t wait to share these with you over the coming months. But, for now we’re taking a break from the garden and heading in to our kitchen!

When we moved in last May, the kitchen was the one room I knew I wanted to tackle straight away. There was damp, mould and a smell that I just couldn’t grin and bare; so we set up a temporary kitchen in another room and got to work. We were 90% done before Christmas, which was amazing as we had a 20 strong group for Christmas day! After which, we parked any sort of decorating work in favour of focusing our efforts outside. However, there was one job I’d been itching to do all year and couldn’t put off any longer, and that was to tile the back splash behind the range. 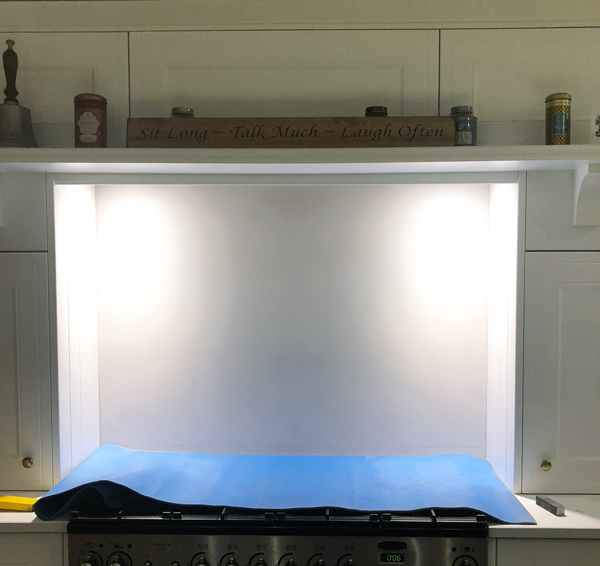 I chose a white kitchen, I’ve always wanted one. The kitchens in my last few homes have typically been dark cabinetry with dark counter tops. We’ve had it all, from a charming green country kitchen in a barn complete with red Aga, to more contemporary designs with sparkly granite galore. I toyed with the idea of doing either a marble herringbone or white subway tile for the back splash to compliment the white cabinets  (with texture) for months now. Then, I stumbled across a navy blue sample tile I ordered way back when we moved in and fell for it all over again. I decided to go for it, as the island cabinetry is also navy and the two seem to work well together, plus I think it adds more warmth to the space.

Anyhow, I’ve rambled on a touch. Here’s how we did it. I was in charge of measuring, laying the tile and grouting. My partner in crime double checked the measurements and handled the tile cutter, as it didn’t seem to like me. (insert eye roll) We started the project after dinner one night hence the funny lighting of some of these pics. 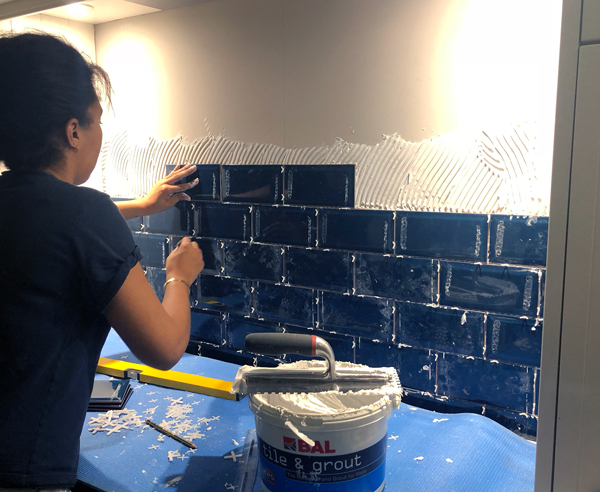 We added a strip of wood behind the range as support for the first row of tiles. The first row was the trickiest and definitely took the longest. I would say take your time on it with a measure twice, cut once approach. We found the centre of the wall and worked out how the tile would terminate at each end so we didn’t have a thin end tile, then made adjustments. 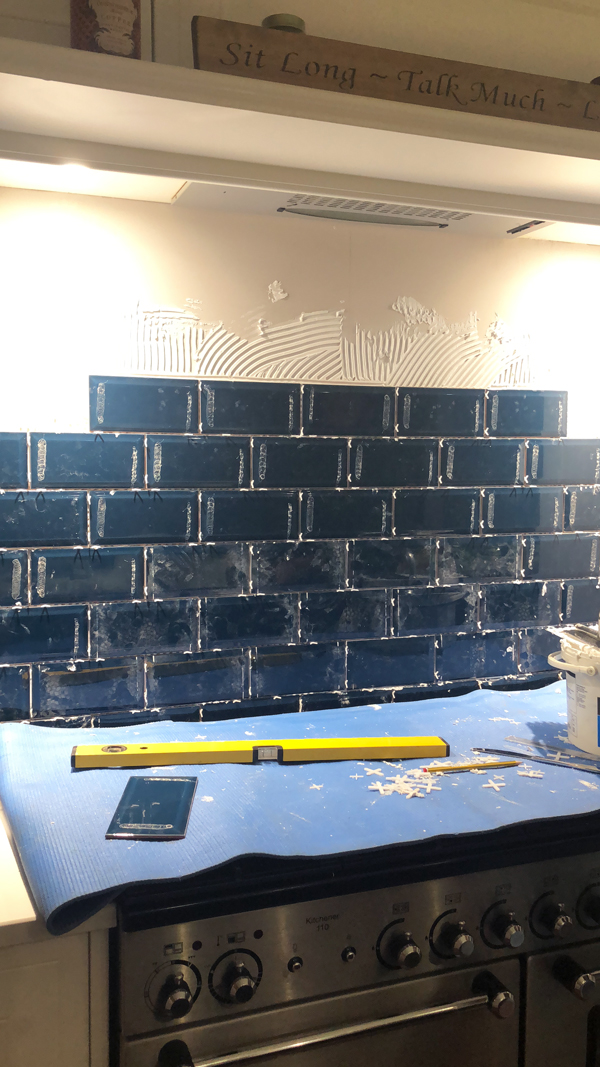 I used a ready mixed adhesive and grout combination in the colour ice white, which worked really well. There was no fussing with measuring anything out, or trying to get the right consistency. I applied enough adhesive to do one row at a time, so that the adhesive wouldn’t dry out whilst we were making cuts i.e. making mistakes. 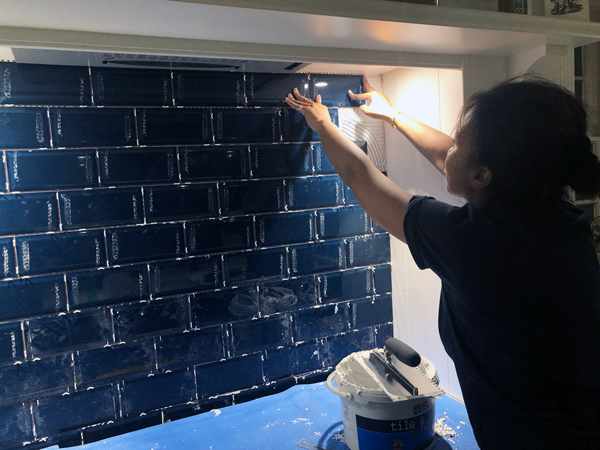 I used 2mm spacers between the tiles and checked each row with a spirit level before moving on to the next. 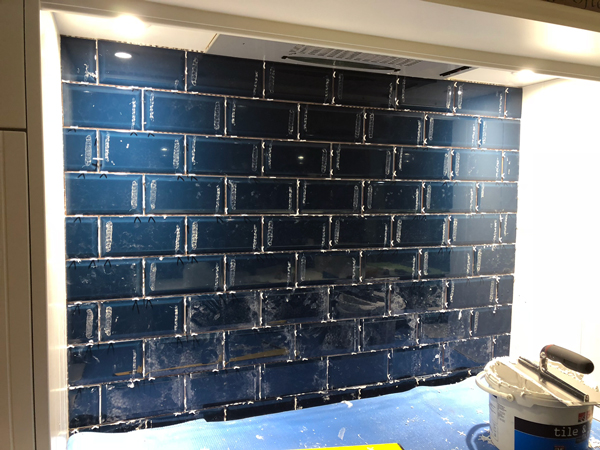 When using the tile cutter, the only tip I can share is to make sure and score the tile end to end. This may sound obvious enough but on a bevelled tile, it can be trickier to apply the same pressure all the way across when scoring. We had to score some of the tiles 2 or 3 times before they snapped easily, with a clean edge. 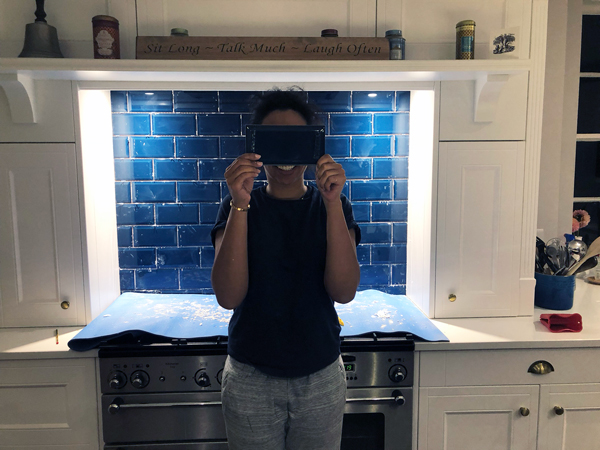 Done with one tile left to spare! I left the tile to dry for 24 hours before removing the spacers. 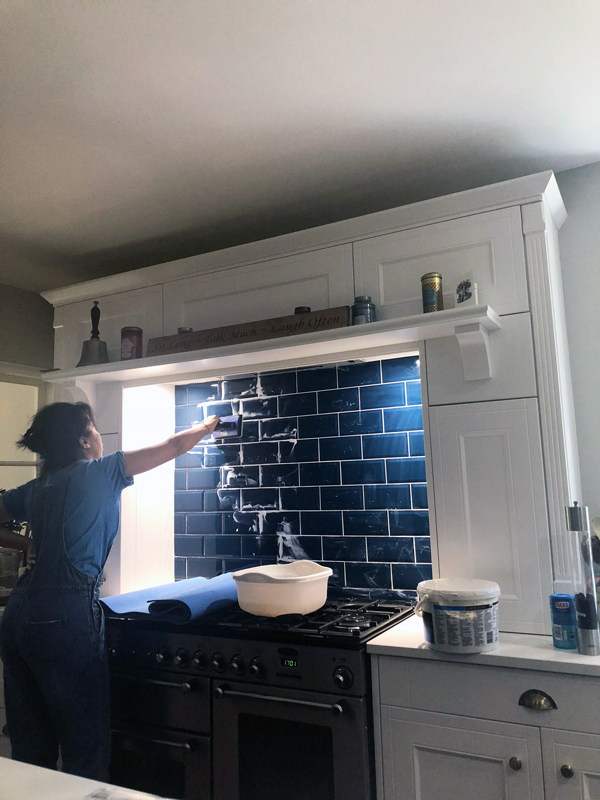 The next day, I removed any excess adhesive with warm water and a sponge and let it dry before applying the grout. I grouted half the wall then went over it with a damp sponge to remove the excess, making sure the grout lines were even. There are a ton of videos explaining this far better than I can on YouTube. It is quite a finicky process, but if you keep the trowel at a 45 degree angle throughout it is far easier to spread. Also, don’t let the grout set for too long before sponging off, I would say no more than 10 minutes max. Obviously, timing is dependent on the type of grout you use, so read the label before you start. 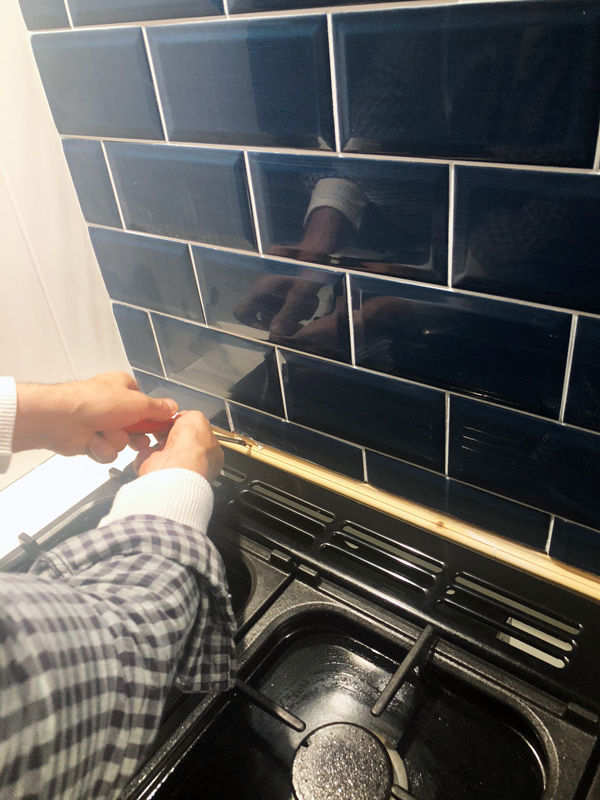 Once the grout was mostly dry, Andrew removed the temporary support. I finished off with caulk around the edges and will also spray the grout with a sealant, once it arrives from Amazon. 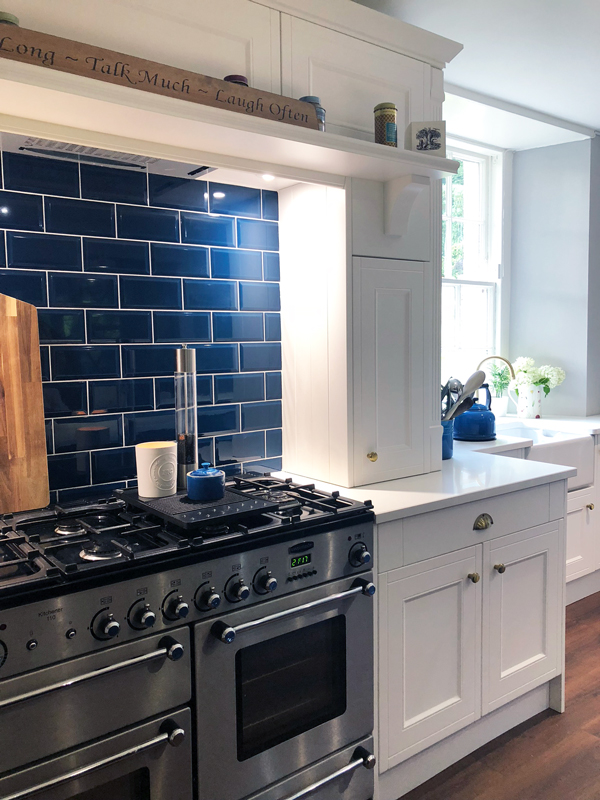 Ta da! To say I’m pleased with how it turned out would be an understatement. It was easier than expected for two people who have never tiled before. The total cost of the project was £110 not including sealant spray, and we got everything from Walls and Floors.* 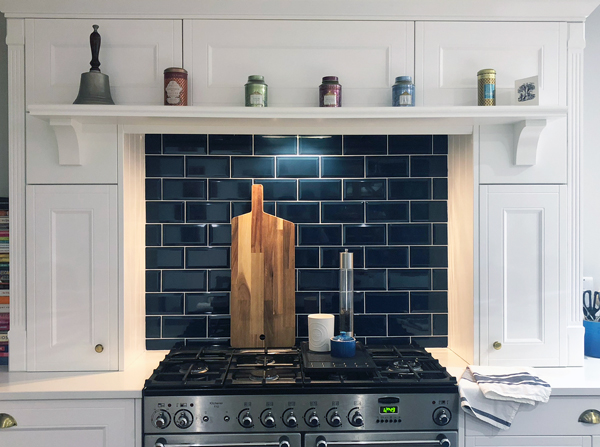 I’d love to hear your thoughts on my first DIY post, leave me a comment below or on my Instagram. Are you in to DIY? Do you have any other tiling tips? 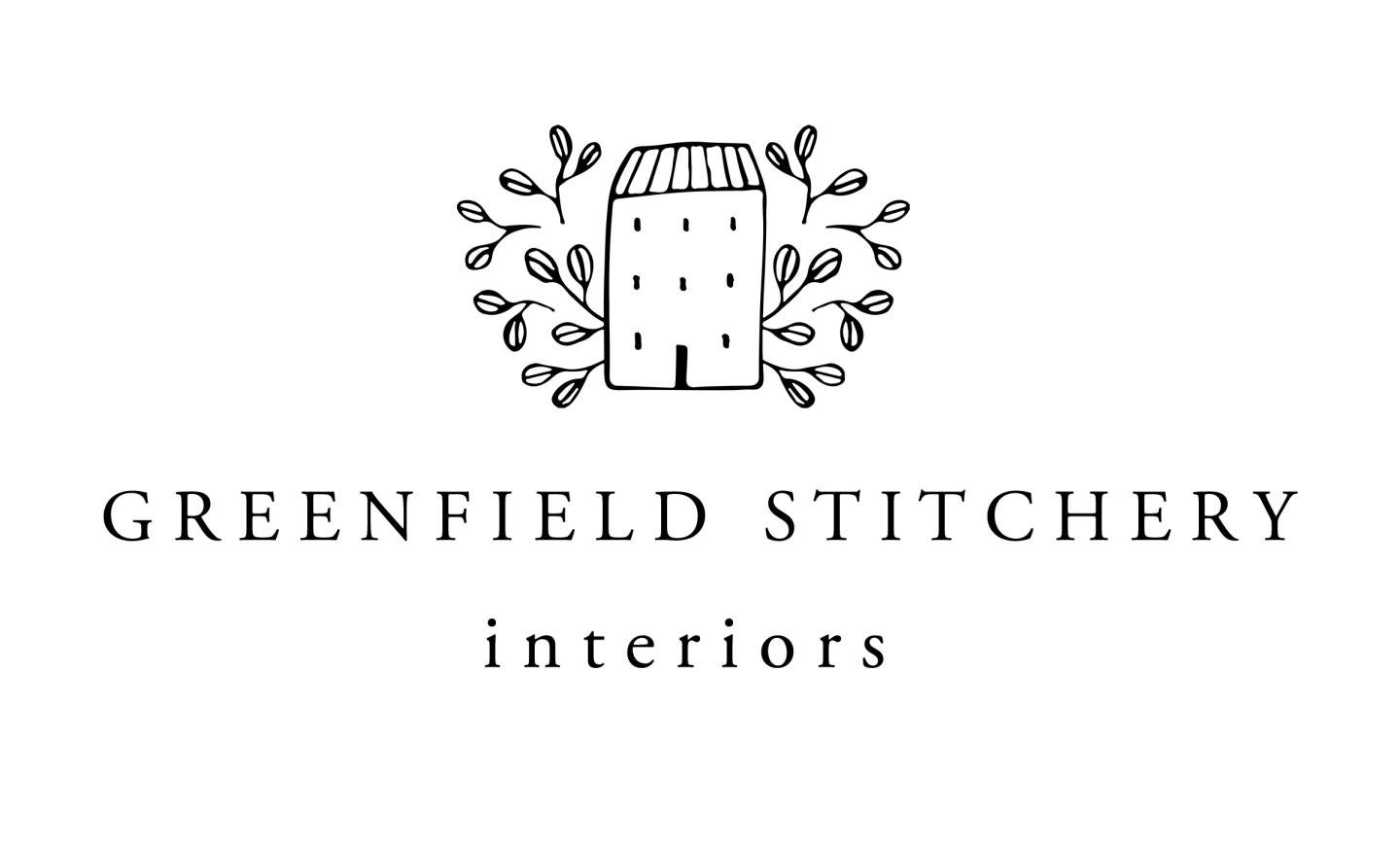